Since January 1, 2020 a scientific and research team that had been assembled in the previous months has embarked on an ambitious European Horizon 2020 project entitled SoPHIA (Social Platform for Holistic Impact Assessment) examining Cultural Heritage practices and their impact at a European scale.  The project involves seven partners from seven European countries.

The kick-off meeting took place in Rome, on January 30-31. 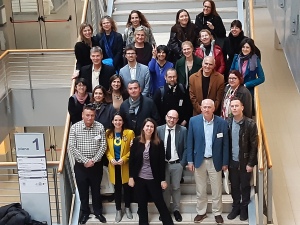 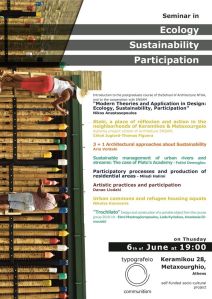 A very successful event which marked the end of the semester of the postgraduate course took place on June 6, at Communitism, Athens with an exciting program full of energy and enthusiasm. The “trochilato” which was designed and constructed by last year’s student group was launched!… 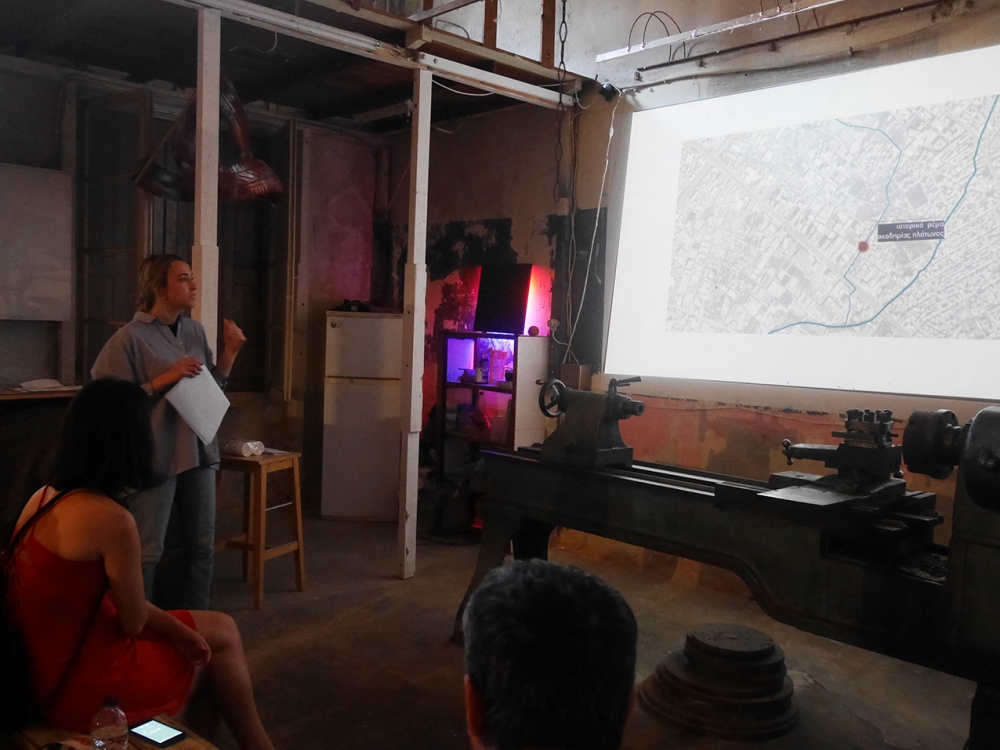 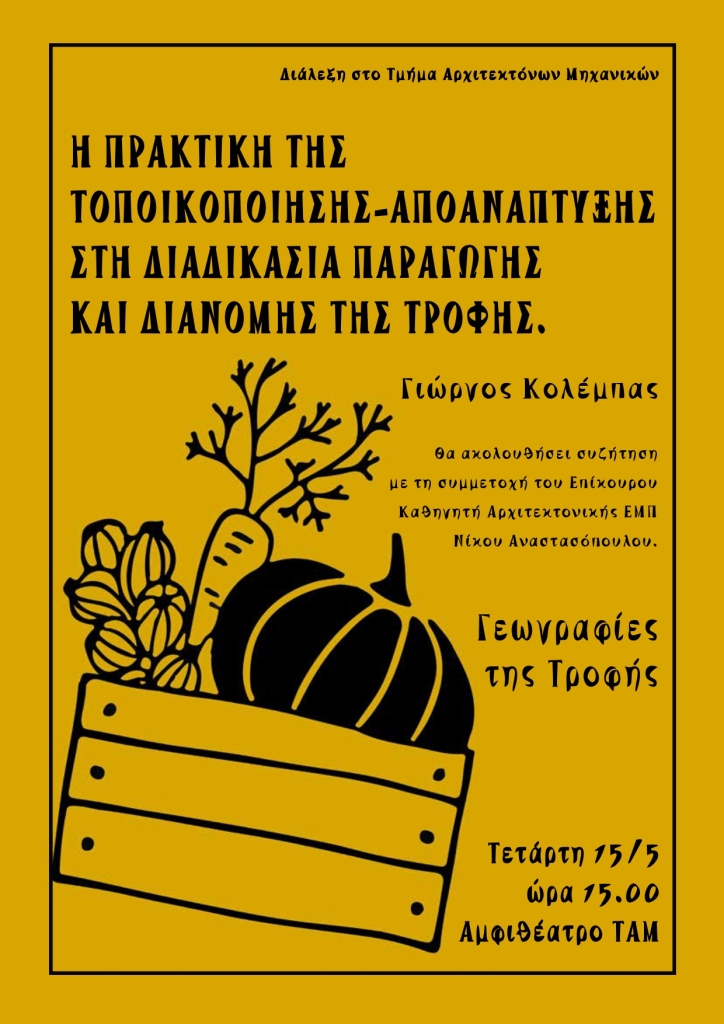 Public discourse and Field trip in the context of ICCG2019 at Plato’s Academy.

The ICCG2019 conference brought together at the School of Architecture at NTUA researchers, academics and activists from all parts of the world.

The book entitled Greece: A Modern Odyssey is the fruit of philosopher and poet Hatto Fischer’s labor, love, and concern for Greece and Athens, where he lived for most of his life with his wife, Anna Arvanitaki and their daughter Maya Fischer.

Hatto was a very dear and precious friend to me during the difficult years of the crisis, precisely the period of time that this collective book in which I contributed with the essay “Reflections from the Greek front” focuses on.

This book was Hatto Fischer’s magnum opus, what occupied him until he left us almost two years ago. Hatto will be greatly missed by all his friends and by the cultural community in Athens.

Greece: A Modern Odyssey, published by Paperwall Media & Publishing serves as testimony of the dense, complex and open-ended effects and consequences of the multi-faceted crisis in this country.

Greece: A Modern Odyssey was launched and discussed at Επι Λέξει bookstore, Akadimias 32, April 10, 2019 at 19:00.
Hemant Divate, publisher, Anna Arvanitaki, co-editor, Giorgos Houliaras, poet and chairman of the Society of Writers, the poet Penelope Duntoulaki, Socrates Kabouropoulos, and myself spoke about the context of the book.
Poems were read by Katerina Angelaki-Rouk and Stamatis Polenakis. I see this collection of essays, visual material and poetry as an archive of testimonies on various topics about one of the most difficult moments of modern Greek history and a collective reflection upon what is past us and what lies ahead.

The book can be found in all major bookstores.

ATHENS AT THE FOREFRONT

What to say about a city like Athens that defies categories?
It’s been around for millennia, a city that has risen to the limelight, and has been falling into oblivion, or flirting with collapse for all sorts of reasons. And then back again. It seems to have the propensity for ups and downs of a roller coaster.

I have thought lately about what other people’s views coming from the four corners of the earth might be for Athens. Immigrants, and refugees have to think about their survival, but the place no doubt resonates in their thoughts and everyday life. Meanwhile tourists, reporters, artists and academics, each of them understand something different, each experience their own subjective reality.

For ever elusive, for ever haunting, it recently captures again  the collective imaginary and has caught the attention of creative people, academics and others.

In order to judge things in fresh approaches I think there are only two ways to achieve that:
The one is to detach yourself for a period of time, sufficient to allow you to look at things anew and,
the other is to gain insight from the newcomers that are free from the weight that habit produces. They can function as “mirrors” (kathreptis) sending back to us an image of our reality through their eyes.

Groups of students together with their professor Jean-Marc Huygen, a dear colleague and friend with like-minded ideas, have been studying in recent years neighborhoods in the center of Athens, such as Metaxourgeio and Keramikos.

I had the pleasure and honor to be invited as an external expert jury member to students diploma theses treating Athens from the School of Architecture of Marseille, which were presented on January 22.

Chloé Juglard and Thomas Figuera presenting their proposal for breathing new life into Kerameikos based on what is already there in terms of human resources, culture, and potential.

Chloé Juglard, Thomas Figuera and Fanny Lambert were three graduating students that developed proposals for their diploma theses around Athens, more specifically in Kerameikos. Their strategy, inspired by Jean-Marc Huygen’s theories and teaching, is based on community empowerment through the development of spaces which encourage collectivity, debate, and exchange, the reuse of materials and the forging of an updated sense of the local.

“In search of New Harmonies”

“In search of New Harmonies” was the topic of the European Utopian Studies Society that took place in Tarragona, Spain. The presentation made entitled “Imagining Buen Vivir” was a step in an ongoing research project which has started in 2014, during my nine-month period spent in Ecuador as  Prometeo researcher.

The exchange with colleague Lena Flamm was an opportunity to participate in two Master’s presentations and to give a lecture entitled “Contextualizing urban crises and searching for appropriate tools: The case of Athens”, as well as to participate in very productive discussions and debates with colleagues and doctoral students! 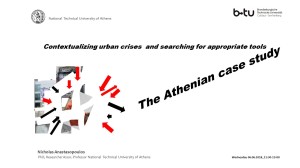 The special issue of the Journal of Peer Production on CITY has been published!

Some of those case studies focus more on peer production technologies and others more on the social and political processes on the ground, all with different research methodologies and approaches. They invite us to reflect on various forms of peer production of knowledge and representation of the city as a commons, where technology should be considered as both a tool (infrastructure) and a contested space. They look at challenges of governance focusing on citizen-driven models of peer production in the city where local governments are called to be in dialogue and build synergies with different stakeholder communities. They use participatory and collaborative methods to collect their data following co-creative research approaches. They are transdisciplinary as much as interdisciplinary in both the methodological and theoretical approaches taken by contributors who merge together urban studies, architecture, informatics, political and social sciences, and ethnography to name a few. The authors collaborated directly – as activists or through their research with other activists, communities and/or stakeholders- giving voice to all those involved in the making and sharing of those projects.

In numbers, there are eight case study research papers which have been peer-reviewed and revised through the particularly transparent review process of JoPP (i.e. for each of the peer-reviewed papers the originally submitted version, the reviews and the final feedback of reviewers on the revised version are made public) and four experimental contributions that have been reviewed by the special issue editors. The experimental pieces follow a less rigorous and more playful format, an interview with commentary, a dialogue, a call for participation, and an open-ended online article. They all invite us, the readers, to follow up their stories in dedicated online venues, or even in face-to-face meetings, and participate in the form of peer production that they advocate for.

Along similar endeavours opening up to possibility and hope in the midst of uncertainty, these twelve stories of peer production, most of them positive and encouraging, document and analyse different forms of citizen engagement and participation. They are good examples of situated action that can provide inspiration and eventually help to build tools, toolkits, best practices, patterns, and methodologies. As editors, we learned a great deal while putting together these contributions, all
different in style, context, and methodology. We hope that they will prove inspiring and empowering for all readers as well to engage as citizens-activists, co-creators, insurgent architects, who appropriate and contextualise urban technologies and materialities to serve local collective needs.

Invited by a colleague, I had the opportunity to visit an exhibition, and most importantly the archive on the kibbutz. held by Yuval Yatsky, Head of the Department.

Attended a lecture and participated at the 1st year mid-term review crit.  The project given to the students involves the design of a system which caters to the needs of growing a specific plant. The process involves full investigation of the plant’s properties and a design stage which involves materials research, and design of a structure, observation of its performance, etc. Brilliant! 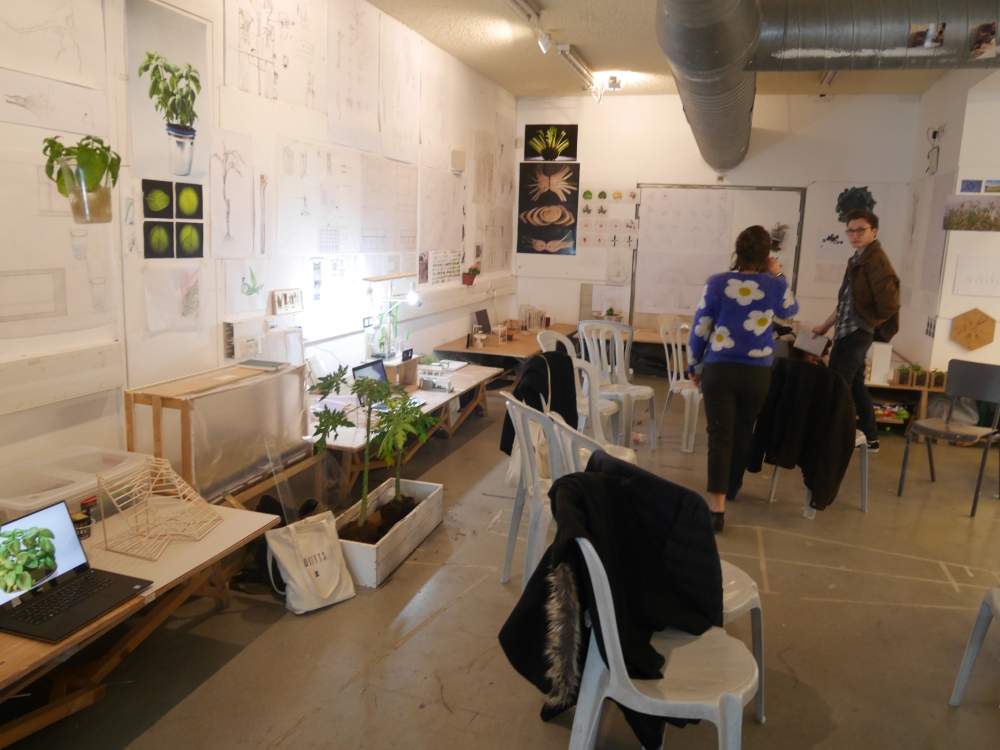 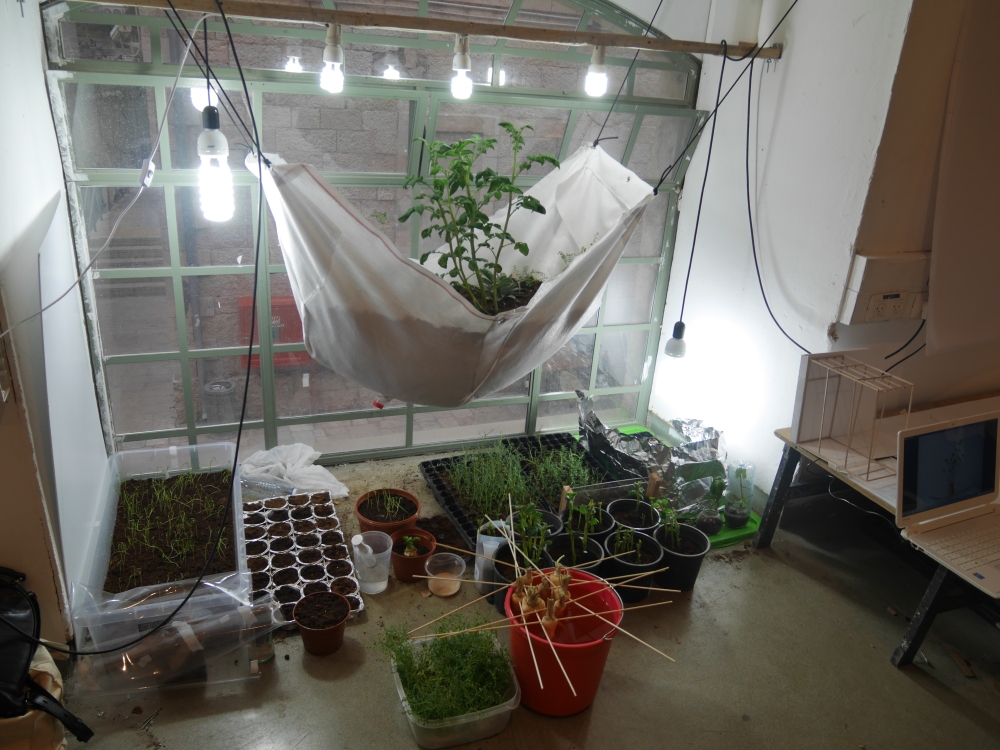 Beyond the Obvious Cultural Agora, Rome

Invited to act as moderator for the  “Engage! Social Innovation & Urban Regeneration” session of the BtO17 (Beyond the Obvious CAE event) in Rome.  I had the opportunity to be exposed to a selection of  European level initiatives and projects and to get to know the panel’s excellent and highly competent presenters.

An Interview with Al Borde

at the Venice Biennale Greek Pavilion

(part of the “Manifesto for a new architecture” series, Anastasopoulos/Travlou)