Christopher Wolfgang Alexander is a widely influential architect and design theorist,  currently an emeritus professor at the University of California, Berkeley were he has taught for several decades. His theories about the nature of human-centered design have affected fields beyond architecture, including urban design, software, sociology, systems thinking, commons theory and others.  For this reason his legacy is wide open and ongoing and many students, faculty members at NTUA, and architects are drawn to Alexander’s approach to thinking and methodologies about urban space and architecture.

An introductory lecture was organized on October 3, Lecture Hall A002, School of Architecture, NTUA, with the participation of two collaborators of Christopher Alexander, Artemis Anninou (co-author of New Urban Theory and Board Member of the Center of Environmental Structure) and Kleonike Tsotropoulou.

The event was organized as an initiative of architect Apostolos Mousourakis, a founding member of the PilOiko collective of architects, who co-facilitated together with Nicholas Anastasopoulos. 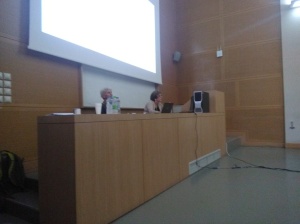